Is the game being a ROYAL pain? Need a hint? Got a problem? This is the place to discuss King's Quest!
Post Reply
31 posts

Re: KQIV agi, the story behind

Akril wrote:Maybe I'm not understanding you entirely, but several Sierra games have had two or more different versions released. There was an EGA version of KQ5, a VGA version of LSL6, and EGA versions of the SQ1 remake and SQ5 (you can read more about them here).

SQ4, actually. Not SQ5 (though I suspect that was a typo).

Re: KQIV agi, the story behind

Akril wrote:Maybe I'm not understanding you entirely, but several Sierra games have had two or more different versions released. There was an EGA version of KQ5, a VGA version of LSL6, and EGA versions of the SQ1 remake and SQ5 (you can read more about them here).

SQ4, actually. Not SQ5 (though I suspect that was a typo).

Ah, you're right. I did mean SQ4. Sorry about that.

Sierra's Resource Files - There is more to Sierra's games than meets the eye...
My Sierra fan art and fan fiction.
Top

Wait, there was an EGA KQ5?

I'd only played the VGA KQ5 (as in 256 colours) - I suspect this was the more common version.

Just as a matter of interest, how do the KQ games stack up vis-a-vis the other Sierra Quest games? The KQ games have always struck me as more "kiddy" than the other Quest games - that is, more aimed at children. The puzzles in the KQ games are certainly simpler (that is, less adult) than the puzzles in QfG, PQ, SQ or - obviously - LSL. (I really doubt that anyone could argue that LSL is suitable for children!)

By contrast, KQ's puzzles, settings and characters always struck me as more suitable for children - which is why KQ has always been my least favourite Sierra Quest series, because it tended to bore me. (The fact that it was so easy to die also didn't help...)

What do you think, hmm?

Yes, but it was still SCI1. It was just a reduction of the palette. I have a copy.

Rath Darkblade wrote:(I really doubt that anyone could argue that LSL is suitable for children!)

I was 10 when I first played LSL1. And loved it back then, even though I didn't speak much English. LSL helped me develop a type of the English language you otherwise wouldn't develop at school. It also improved my typing.
Indeed I like the KQ typing games a lot less. Remember I went here to ask for the comment "mailbox"? I just can't find the patience for verb guessing.
Of the KQ games, I played 1 through 7, but only completed 2, 3, 6 and 7. KQ7 I played auf Deutsch und das war doch zu viel Mühe, leider hatte ich etwas wichtiges nicht so gut verstehen. Of these, KQ3 I consider on par quality-wise with LSL1 when it comes to entertainment value (I love the magic spells), and KQ6 is very good: unfortunately I do have trouble if closed captions aren't on, so when playing it the first time I had to turn the sound off to make sure I didn't miss any clues. KQ4 could've been great, I might have continued playing it if it wasn't for the troll caves.
I'm a huge mythology and folk tale buff: it's strange I couldn't get into KQ as much as in LSL or GK, or even Shivers. Is it the puzzles? The story line?
There's a new script around: PHANTASMAGORIA! Check the Script Party topic in the Bard's Forum!
Skip to new scripts
Top

Hmmm... well, I don't think I can argue with you there, BBP.

I first played LSL1 when I was 13 or so, and I liked it. It was... interesting. *grin* I agree that it improved my typing and helped me develop a different vocabulary from what I'd learn at school.

I suppose the whole argument centres on which LSL games you mean, and how you define 'children'; for instance, I doubt that a game like LSL7 would be suitable for a 5-year-old child. I'm not a prude (much), but I think there are some limits.

As for KQ, I played KQ3, KQ4 and KQ5, but only finished 5. Cedric put me off KQ for years. "Graham, watch out! That snake looks poisonous! That desert looks hot! That castle looks scary! A POI-sonous scorpion! That boat is sinking!" Ugh, ugh, ugh. *beats head against wall*

Believe me, I cheered when Cedric, who had been completely useless throughout the entire game, sacrificed himself to save my life at the end. I also just could not finish the game without a guide, because Mordack's castle is a labyrinth, where the screen's orientation changes depending on which direction you come from. Argh, argh, argh.

I'm getting a headache just thinking about how many times I died in that place for no good reason.

Not to mention that early in the game, just to progress, I have to violate common sense by wandering around in the desert with NO provisions and NO water. Errr... what?

Anyway, enough ranting from me... 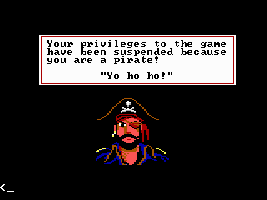 However, I have 2.3 and it's a different pirate screen:

And it's weird that the AGI version has a higher version number than the SCI version?

Collector wrote:Both pic resources are in all of the versions, but if the Easter egg is active, the pic used is random.

Weird! I guess I got lucky and got the same picture three times!

So even though it says version 2.0 - this applies to version 2.X really then? Because mine is 2.3? I was going to play it (after Dagger of Amon Ra), to have saves (since it seems like it's a rare version) and to test the "beam me" easter egg.
Tawmis.com - Voice Actor
Comic Relief Podcast!
Neverending Nights
Hello, my name is Larry. Larry Laffer!
Top

For posterity, here is the thread at Quest Studios where Cloudschatze first brought KQ4 V 1.000.111 to my attention and its alternate pic resources with screenshots for comparison. I had replied with some KQ4AGI screenshots which showed more similarity to V1.000.111, but those are no longer hosted wherever I put them.

And here's a page that shows almost all (if not all) the screenshots of KQ5EGA. The same website has sections for other EGA Sierra games as well.

I wish I had a copy of the EGA version of KQ5.
Top

I cannot locate KQ4 AGI version 2.0 on eBay or otherwise. I don't particularly care about the physical media but I would like the original, unmodified files -- do I have any other avenues to pursue?

Edit: Found this one, however, I don't have a 5.25" disk drive and I can't find a reasonably priced one on Amazon that isn't out of stock...
Top
Post Reply
31 posts

Return to “The King's Quest Series”