Talk about games or general tech issues that are not Sierra related.
Post Reply
12 posts • Page 1 of 1

It was really cool - Taakokessler decided to give my text adventure game, Final Soul a try... now, I made this game, back in 1995 - while my then (fiance') and I were living with my best friend - and his wife and their two kids (we had just moved out of TN, where we both lived together for 2.5 years of Hades - no offense to anyone who lives in TN - just wasn't for us - since we were both big city people). Anyway, I wrote this program in 1995 in PowerBasic (I believe it was) and compiled it with the PowerBasic compiler to make it an .EXE file that ran in DOS and back then - that was still legit - because everyone pretty much had Windows 3.1 (or 3.11) and Windows 95 was just on the horizon. When I finished the game, before compiling it - I ran through it and found some bugs. Then, I gave it to Charles, his wife Tammy, and Amiee - all to run through and test it (they helped nail down some other bugs).

Once I was sure most of the bugs were found - I tried to compile the game. The game, almost immediately kicked back a Memory error that it would need to truncate the game to compile successfully. Doing so, as you can imagine, completely broke the game. So the next move was to go into the code and shorten it as much as I could. A lot - and I mean a LOT of additional text was cut out of the game, from dialogue from other people in the game. Still not enough. Next - the commands - all the "get", "use", "look" commands were shortened to single letter commands ("U" for use, "G" for get, "L" for look, etc). Still not enough - so I wrote a command that pokes the memory and forces CAPS LOCK on, while playing the game. This way I could reduce the lower case commands.

Finally the game compiled, as version 0.04 (I believe I called it). Uploaded it to the America Online file server thing they had (similar to news groups - like rec.arts.comics - for folks that remember that far back!) The years that followed I went through several computers, and as you can imagine the original .BAS files which I used to make the game, were soon long lost history. The game was inspired by Sierra games and has "Sierra like puzzles" (as limited as I was with the compiler).

Anyway, when Taakokessler decided to give it a try last week - we were going back and forth when they would get stuck, and I had a walk through on the site - but they were running into all kinds of problems. So I had them send me their save game so I could poke at it - and I immediately found some additional bugs (for example, after you use the bucket in the game, it's supposed to flag as "Destroyed" - but then when it does - it becomes available to pick up again in it's original location

). Along the same line as bugs found - there's something that triggers a plant you can climb - and although the plant is there, Taakokessler was only getting a message that said "...wow..." without doing anything else - and I realized, I had put "mandatory triggers" in the game (so basically I required players to do 99% of the game, or else specific things wouldn't work) - and in trimming code the "...wow..." message was supposed to be "...wow... how did you know to do that...?" intending that the player was skipping steps to get to that part... and there's also another part - where in the beginning of the game, you do something in the trophy room that opens a door to the north - but the room description never changes - and if you go north, the game simply tells you it has no idea what you're doing... there was supposed to be code there to check to see if you had a specific key - and if you didn't - it'd say "The door is locked." But because I stripped code and missed that, the message isn't there - and the game acts like it has no idea what you're trying - unless YOU HAVE the key - then the door works to the north.

So by tweaking my save game - I found all the item values, the room values, and the mandatory trigger values. So that was kind of fun.

I have since then, updated the Walkthru in this problematic spots to say - "Hey, you can finish the game - but do you have the following items" or "Have you done the following things - because they're required trigger points."

I wish I had the original source code to the game (or there was a way to successfully reverse compile the game) - so I could make those fixes.

Collector wrote:Rewrite it in SCI!

Hah! If I had a firm grasp on how to make a SCI game - I'd totally do it!
Tawmis.com - Voice Actor
Comic Relief Podcast!
Neverending Nights
Hello, my name is Larry. Larry Laffer!
Top

You can also combine your love of video production with it using my SEQTool SCI Companion plugin to create and edit intros and cutscenes like in KQ6. All you need to do is to convert your video to ani-GIF to import into the tool to create a SEQ resource to use in your game. You can find lots of help on the SCI Programming forum. 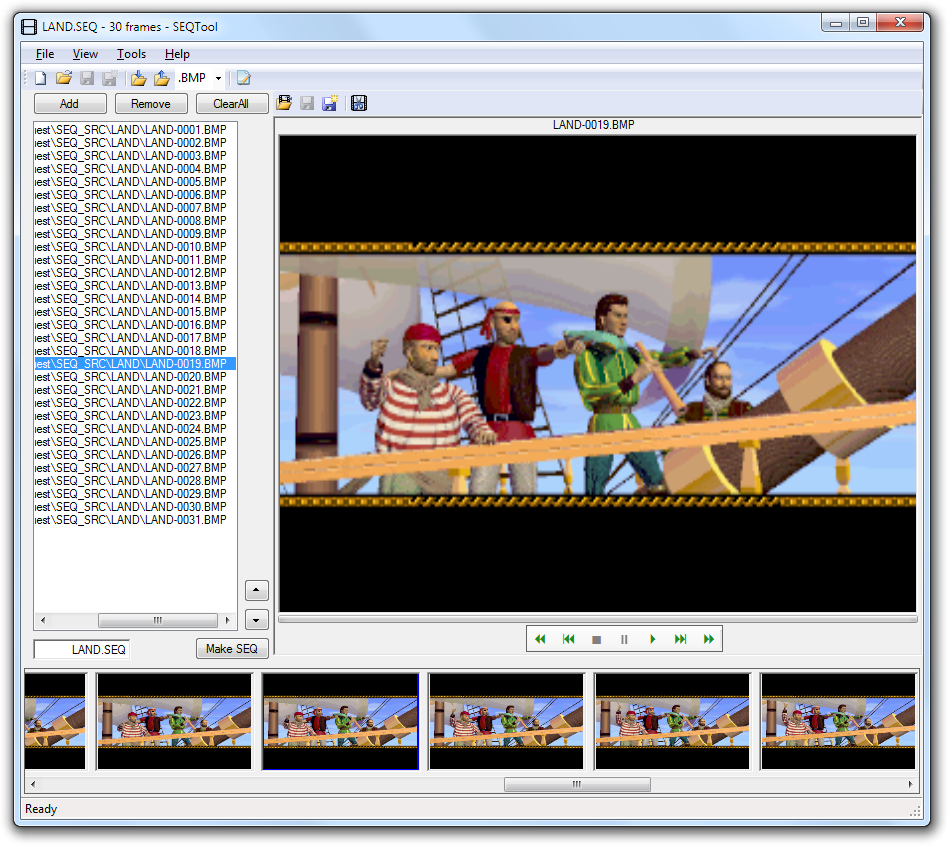 Thank you so much, I had a lot of fun playing! I love games like this, kudos! (also dang I haven't been on this site forever I gotta figure out how to make a profile pic)

ETA: holy crap I guess I did make a profile pic way back, such a flashback
Top

See, if I had access to all of this like 20 years ago - I'd already be cranking out SCI games left and right - because I would have had more (ample) time to learn SCI programming... and tinker around with the SCI art, which is a skill and talent, all it's own.


Collector wrote:You can also combine your love of video production with it using my SEQTool SCI Companion plugin to create and edit intros and cutscenes like in KQ6. All you need to do is to convert your video to ani-GIF to import into the tool to create a SEQ resource to use in your game. You can find lots of help on the SCI Programming forum.
[Remove Excellent KQVI Image]

I would be happy with being able to do this in AGI, when it all boils down to it. But the time and effort it'd take me to learn either AGI or SCI is probably way more time than I currently have on my hands. I was even going to try and make the sequel using the Quest software, but hit a learning curve and gave up - because I have entirely too many hobbies cutting into too much of my time (something I know I frequently complain about).

Collector wrote:You need to win the lotto to have more time.

Yes. So much yes.

I've even discussed this with the wife. I've been powering through finishing one of my websites completely. To knock that off my list of things to do; and putting everything else on hold, so my attention isn't scattered. (Or... more scattered than my brain already is!)

I remember asking - feels like eons ago - on here, if folks were interested in doing a SCI/AGI game. Because aside from the programming, there's the art, too - my strength would be solely the story and puzzles, which puts the programming and art on others.

Granted, the "character" is pretty much done, because you can recolor and export it from an existing Sierra game.

For views you could try starting with a video and export it into a series of images to import into Companion's view editor. Backgrounds could be imported, too. That just leaves the programming.

But also, just fool around with SCI Companion for fun in your spare time. You might be surprised what you eventually come up with when you don't tackle it like a big project from the get go. Just make a couple sprites, a background, etc. Fiddle. What I did with SCI Studio (back in the day, albeit). And hey, I still haven't finished KQ2SCI lol.

I want to. I am just trying to finish off projects I have scattered all over the place before I try something new.
Tawmis.com - Voice Actor
Comic Relief Podcast!
Neverending Nights
Hello, my name is Larry. Larry Laffer!
Top
Post Reply
12 posts • Page 1 of 1